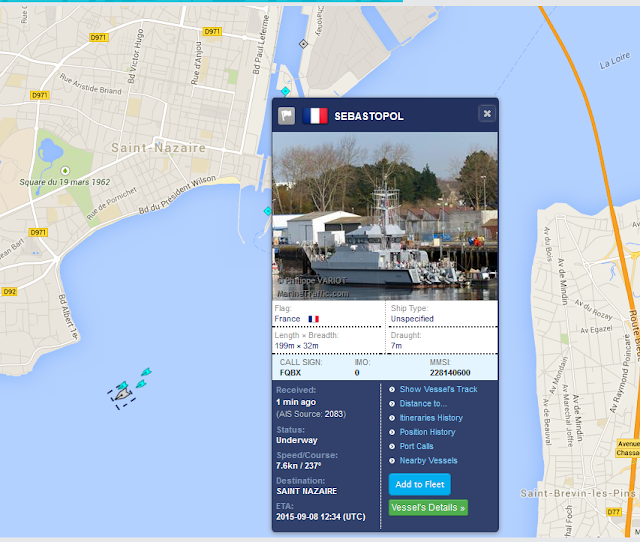 The second Mistral war ship "Sevastopol" just left St Nazaire to go on sea trials. You can follow it live with this link (the picture of the ship is wrong on the website but this is the correct one): http://www.marinetraffic.com/en/ais/home/centerx:-2.196903/centery:47.2639/zoom:8/mmsi:228140600/shipid:2061662 On March 4, 2015, on "No Mistrals for Putin" Facebook page we wrote: First sails for BPC Sebastopol tests  in March - With Russian officers? Long before the end of June 2014, Russian officers had boarded a Mistral in St Nazaire. This has been confirmed to us by a local hotel owner and it is also what we could deduce from the video of the first test of the Vladivostok in March 2014. At the VHF (radio), we heard Russian language was spoken. For Sevastopol, will they be there this month? If so, the secret is well kept as it would arouse unanimous disapproval while the army of Putin and his auxiliaries of the Donbass violate the Minsk 2 agreements spons
Enregistrer un commentaire
Pays/territoire : 44600 Saint-Nazaire, France
Lire la suite
Autres articles